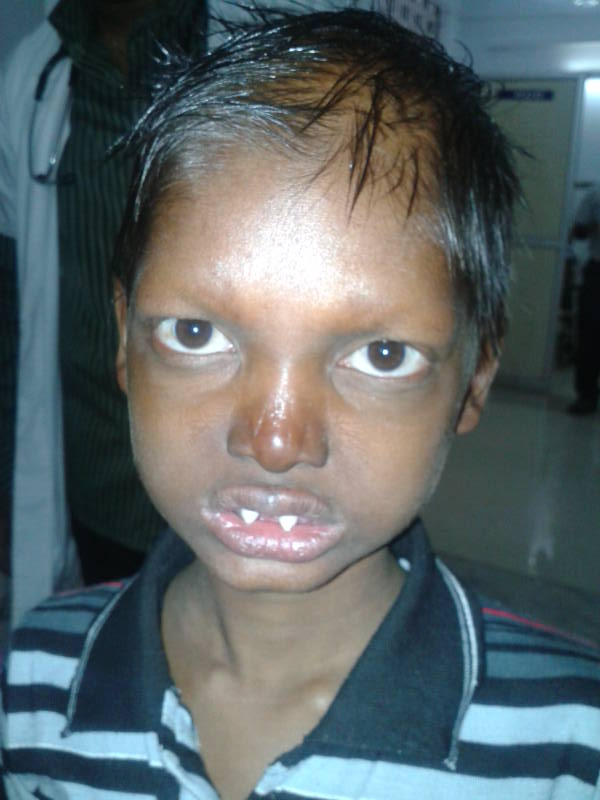 Ectodermal dysplasia (ED) is a group of genetic syndromes all deriving from abnormalities of the ectodermal structures.:570 More than 150 different syndromes have been identified.

Despite some of the syndromes having different genetic causes, the symptoms are sometimes very similar. Diagnosis is usually by clinical observation, often with the assistance of family medical histories so that it can be determined whether transmission is autosomal dominant or recessive.

Worldwide, around 7,000 people have been diagnosed with an ectodermal dysplasia condition. Some ED conditions are only present in single family units and derive from very recent mutations. Ectodermal dysplasias can occur in any race but are much more prevalent in Caucasians than any other group and especially in fair Caucasians.

Ectodermal dysplasias are described as "heritable conditions in which there are abnormalities of two or more ectodermal structures such as the hair, teeth, nails, sweat glands, salivary glands, cranial-facial structure, digits and other parts of the body."

Individuals affected by an ED syndrome frequently have abnormalities of the hair follicles. Scalp and body hair may be thin, sparse, and very light in color, even though beard growth in affected males may be normal. The hair may grow very slowly or sporadically and it may be excessively fragile, curly, or even twisted. Kinky hair is also a possibility.

Fingernails and toenails may be thick, abnormally shaped, discolored, ridged, slow-growing, or brittle. The cuticles may be prone to infections.

The skin may be lightly pigmented. Skin sustaining injury may grow back permanently hypo-pigmented. In some cases, red or brown pigmentation may be present. Skin can be prone to rashes or infections and can be thick over the palms and soles. Care must be taken to prevent cracking, bleeding, and infection.

Individuals affected by certain ED syndromes cannot perspire. Their sweat glands may function abnormally or may not have developed at all because of inactive proteins in the sweat glands. Without normal sweat production, the body cannot regulate temperature properly. Therefore, overheating is a common problem, especially during hot weather. Access to cool environments is important. Dental abnormalities in a 5-year-old girl from north Sweden family who suffered from various symptoms of autosomal dominant hypohidrotic ectodermal dysplasia (HED):
a) Intraoral view. Note that the upper incisors have been restored with composite material to disguise their original conical shape.
b) Orthopantomogram showing absence of ten primary and eleven permanent teeth in the jaws of the same individual.

Several studies have examined salivary flow rate in individuals and found parotid and submandibular salivary flow ranging from 5 to 15 times lower than average. This is consistent with the salivary glands being of ectodermal origin, although some findings have suggested that there is also mesodermal input.

The development of tooth buds frequently results in congenitally absent teeth (in many cases a lack of a permanent set) and/or in the growth of teeth that are peg-shaped or pointed. The enamel may also be defective. Cosmetic dental treatment is almost always necessary and children may need dentures as early as two years of age. Multiple denture replacements are often needed as the child grows, and dental implants may be an option in adolescence, once the jaw is fully grown. Nowadays the option of extracting the teeth and substituting them with dental implants is quite common. In other cases, teeth can be crowned. Orthodontic treatment also may be necessary. Because dental treatment is complex, a multi-disciplinary approach is best.

People with ED often have certain cranial-facial features which can be distinctive: frontal bossing is common, longer or more pronounced chins are frequent, broader noses are also very common. In some types of ED, abnormal development of parts of the eye can result in dryness of the eye, cataracts, and vision defects. Professional eye care can help minimize the effects of ED on vision. Similarly, abnormalities in the development of the ear may cause hearing problems. Respiratory infections can be more common because the normal protective secretions of the mouth and nose are not present. Precautions must be taken to limit infections.

ED can be classified by inheritance (autosomal dominant, autosomal recessive and X-linked) or by which structures are involved (hair, teeth, nails and/or sweat glands).

There are several different types with distinct genetic causes: