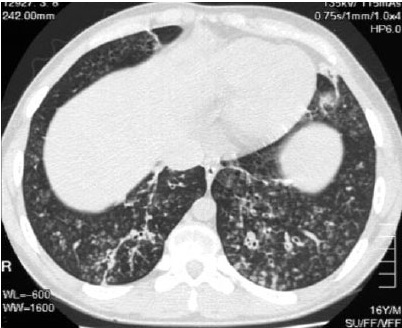 Diffuse panbronchiolitis (DPB) is a rare chronic inflammatory obstructive pulmonary disease primarily affecting the respiratory bronchioles. 'Diffuse' refers to the distribution of the lesions throughout both lungs, and 'pan-' refers to the involvement of inflammation in all layers of the respiratory bronchioles. Onset of the disorder occurs in the second to fifth decade of life, and is clinically manifest by chronic cough, exertional dyspnea, and sputum production. Most patients also have chronic paranasal sinusitis. If untreated, the disorder progresses to bronchiectasis, respiratory failure, and death (summary by Poletti et al., 2006).

Yamanaka et al. (1969) first described a chronic airway disease in Japan. They termed it diffuse panbronchiolitis to distinguish it from chronic bronchitis.

Homma et al. (1983) reported numerous Japanese patients with diffuse panbronchiolitis. Patients with the disease had obstructive respiratory impairment, similar to emphysema, with occasional wheezing and coughing, similar to bronchial asthma. There was often sputum production, resembling chronic bronchitis. In the advanced stages of the disease, there was a large amount of purulent sputum and dilatation of proximal terminal conducting bronchioli, resembling bronchiectasis. Pathologic findings included chronic inflammation, with interstitial infiltration of lymphocytes, plasma cells, and histiocytes, exclusively located in the respiratory bronchioles and associated with thickening of the wall of the respiratory bronchiole. Some had extension of the inflammatory changes toward peribronchiolar tissues. Secondary ectasia of proximal bronchioli occurred in advanced stages. Homma et al. (1983) suggested that diffuse panbronchiolitis belongs to a distinct disease category and should be distinguished from more common diseases, because it often shows rapid progression with fatal outcome. The disease occurred more frequently in males, and onset was unrelated to age. More than 1,000 cases of probable diffuse panbronchiolitis and 82 histologically-confirmed cases had been collected in Japan.

Kim et al. (1992) reported 5 Korean unrelated patients, including 2 women, with diffuse panbronchiolitis. Two were histologically proven, and 3 were suspected based on clinical symptoms and radiographic studies. All 5 had the typical respiratory symptoms and signs, including onset in their twenties of progressive wheezing, dyspnea, cough, and sputum production associated with crackles and rhonchi on auscultation. All patients also had a history of chronic sinusitis, and none had a history of smoking. High-resolution CT scan showed hyperinflated lungs with diffuse small nodular densities, 2 to 3 mm in diameter, and thickened bronchial walls, especially in the lower lung fields. Lung biopsies of 2 patients showed thickening of the wall of the bronchioles with infiltration of lymphocytes, plasma cells, and foamy histiocytes, which were also present in adjacent alveolar septa. All patients showed clinical improvement with low-dose erythromycin.

Other features characteristic of diffuse panbronchiolitis are coexisting sinusitis, as well as infection with Haemophilus influenzae and Pseudomonas aeruginosa. Neutrophils and T lymphocytes, particularly CD8+ cells, together with the cytokines interleukin-8 (IL8; 146930) and macrophage inflammatory protein-1 (CCL3; 182283), are believed to play key roles in the development of DPB (Poletti et al., 2006).

Association with HLA on Chromosome 6p21.3

Keicho et al. (2000) hypothesized that a founder mutation of a putative disease-susceptibility gene located between the HLA-B and HLA-A loci occurred on an ancestral chromosome bearing HLA-B54 and HLA-A11 in East Asia. They considered it conceivable that different historic recombination events around the disease locus resulted in disease associations with HLA-B54 in Japanese and HLA-A11 in Koreans. To test this hypothesis, Keicho et al. (2000) analyzed 14 genetic markers in the HLA class I region, including 9 highly polymorphic microsatellites, in 92 Japanese patients and 93 healthy controls. Seven markers, including B54 and A11, were significantly associated with the disease. All the haplotypes observed seemed to have diverged from a common ancestral haplotype in East Asians and shared a specific segment containing 3 consecutive markers between the S (CDSN; 602593) and GTF2H4 (601760) loci in the class I region. Of 20 Korean patients with diffuse panbronchiolitis, 17 also shared the combination of the disease-associated marker loci within the candidate region. Keicho et al. (2000) interpreted the results as indicating that an HLA-associated major histocompatibility gene for diffuse panbronchiolitis is located within the class I region 300-kb telomeric of the HLA-B locus on chromosome 6p21.3.

In a Japanese population, Emi et al. (1999) demonstrated an association between a specific allele at the IL8 locus (146930) on chromosome 4q12-q13 and diffuse panbronchiolitis.

Long-term treatment with macrolide antibiotics have resulted in significant improvement in the prognosis of this potentially fatal disease. The effect is attributed to an antiinflammatory and immunoregulatory action (Poletti et al., 2006).