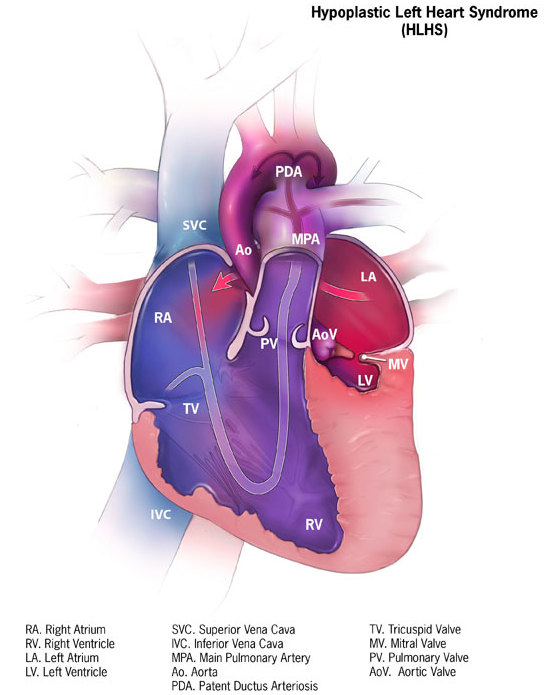 A rare, congenital, non-syndromic, heart malformation characterized by under development of the left-sided cardiac structures (including left ventricle, ascending aorta, aortic arch, and mitral and/or aortic valve) such that the left heart is unable to provide adequate systemic cardiac output.

Hypoplastic left heart syndrome (HLHS) has been reported to occur in 1/3,500 to 12,500 live births. A male to female predominance ratio of 1.5:1 is observed.

Newborn infants with HLHS are generally born at full term. Initially appearing healthy, they are dependent upon the patent ductus arteriosus (PDA) for systemic blood flow. As the PDA closes, systemic perfusion decreases, resulting in hypoxemia, acidosis, and cardiogenic shock. Usually, no heart murmur (or a non-specific heart murmur) is detected. The second heart sound is loud and single because of aortic atresia. Often the liver is enlarged secondary to congestive heart failure. The spectrum of cardiac malformations can be distinguished by the status of the mitral and aortic valves. At the severe end of the spectrum is the aortic and mitral valve atresia (AA/MA) subtype that is associated with an absent or a slit-like left ventricle and diminutive aortic arch. The two other subtypes, aortic atresia with mitral stenosis (AA/MS), and aortic and mitral stenosis (AS/MS) subtype, have variable ventricular hypoplasia with a discrete left ventricular cavity.

As is the case of most congenital cardiac defects, the embryologic cause of the disease is not fully known.

The most useful diagnostic modality is the echocardiogram. Findings on echocardiogram include hypoplasia or atresia of the left ventricle, mitral valve, aortic valve, and ascending aorta.

Antenatal diagnosis is possible as the syndrome can be diagnosed by fetal echocardiography between 18 and 22 weeks of gestation.

Initially, ductal patency is maintained by continuous infusion of intravenous prostaglandin until surgery. Currently, there are two major surgical approaches: univentricular palliation or primary cardiac transplantation, the preference for selecting which option depending on the institutional experience and the availability of donor organs. Univentricular palliation is the most commonly used approach and involves a series of staged cardiac surgical procedures over a period of 2 years that ultimately result in separation of the systemic venous and arterial circulation. Stage I is typically performed in the first week of life, or when the neonate is stable, and techniques may include the Norwood procedure, the Sano modification or the hybrid procedure. Stage II is performed between 3 and 6 months of age and involves the bi-directional Glenn procedure. Stage III, the Fontan procedure, is performed between 2 and 5 years of age. In certain expert centers, fetal transcatheter intervention may be an option. Given the improvement in surgical outcomes, opting for comfort management only remains controversial.

If left untreated, HLHS is universally fatal within a few days- weeks of life. Whilst surgical intervention supports survival through infancy and into early adulthood, the 5-year survival rate is approximately 65%. However, the significant mortality and morbidity associated with both surgical strategies merits discussions with the families regarding the initial decision relative to the treatment and long-term prognosis.